The Diving Community Joins in the C-19 Fight

While the diving industry has been all but shuttered as a result of the coronavirus pandemic, some diving organizations are providing their unique expertise to help in the fight against the virus, and more are likely to join as the pandemic continues. Watch this space.

In response to calls from health providers inquiring whether British rebreather manufacturer AP Diving, could help increase their capacity to provide oxygen to sick patients—doctors were concerned that many patients’ oxygen saturation levels were too low when arriving at the hospital—Managing Director Martin Parker sprang into action. In a day, Parker and his team had developed and tested a low-tech, adapter costing 6 £, that can be fitted to the first-stage scuba regulator on an O2 cylinder and provide a constant adjustable flow of oxygen at 7-9 liters/min. to patients through a “non-rebreather” medical mask. 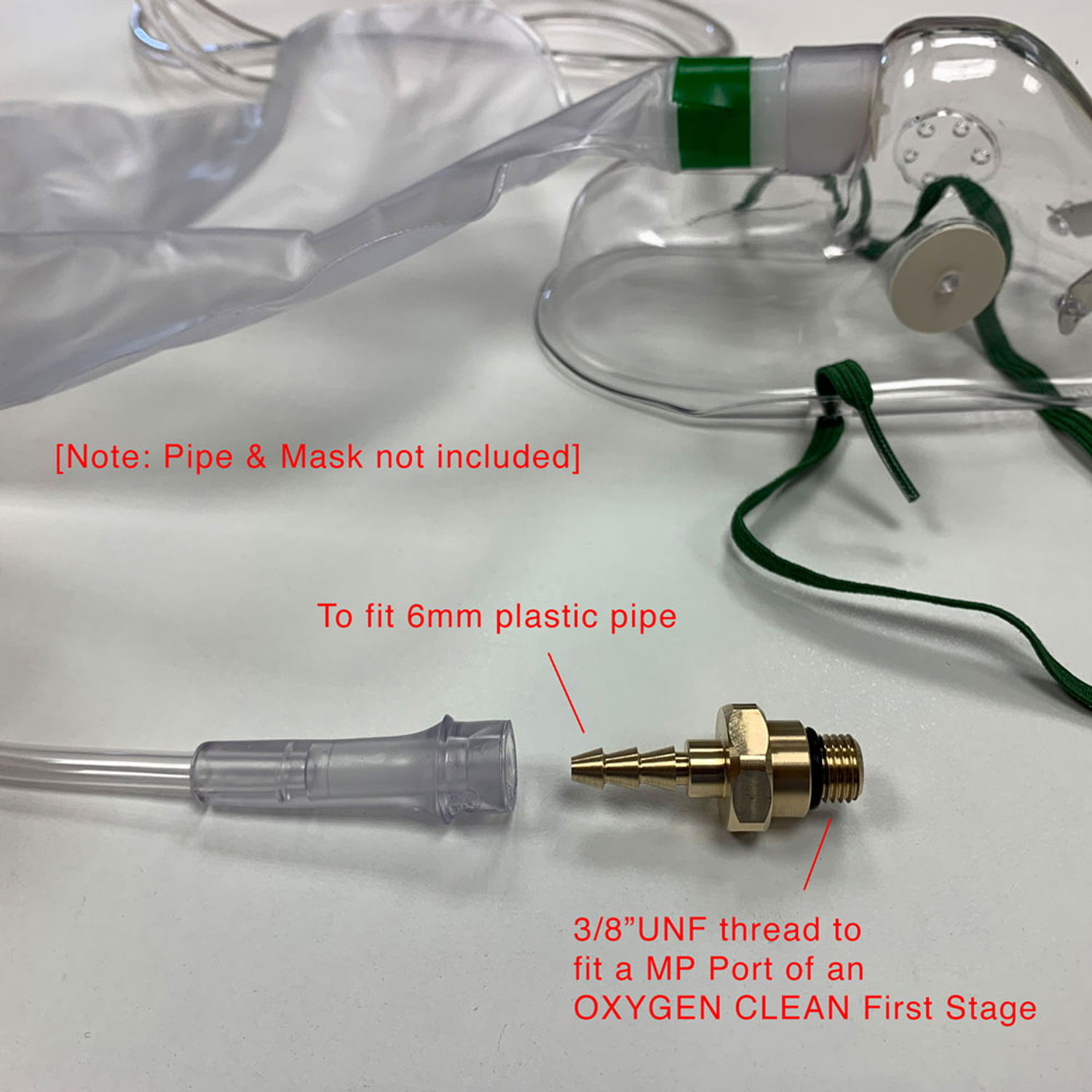 Shortly thereafter, the British government closed all non-essential factories such as AP Diving, but Parker brought in a skeleton crew to produce a supply of adapters called SCUBA2MED2, to be given for free to individuals and organizations in need. They then sent engineering drawings to regulator manufacturers such as Apex and Interspiro, posted the drawings “open source” for others to reproduce, and let their customers know. 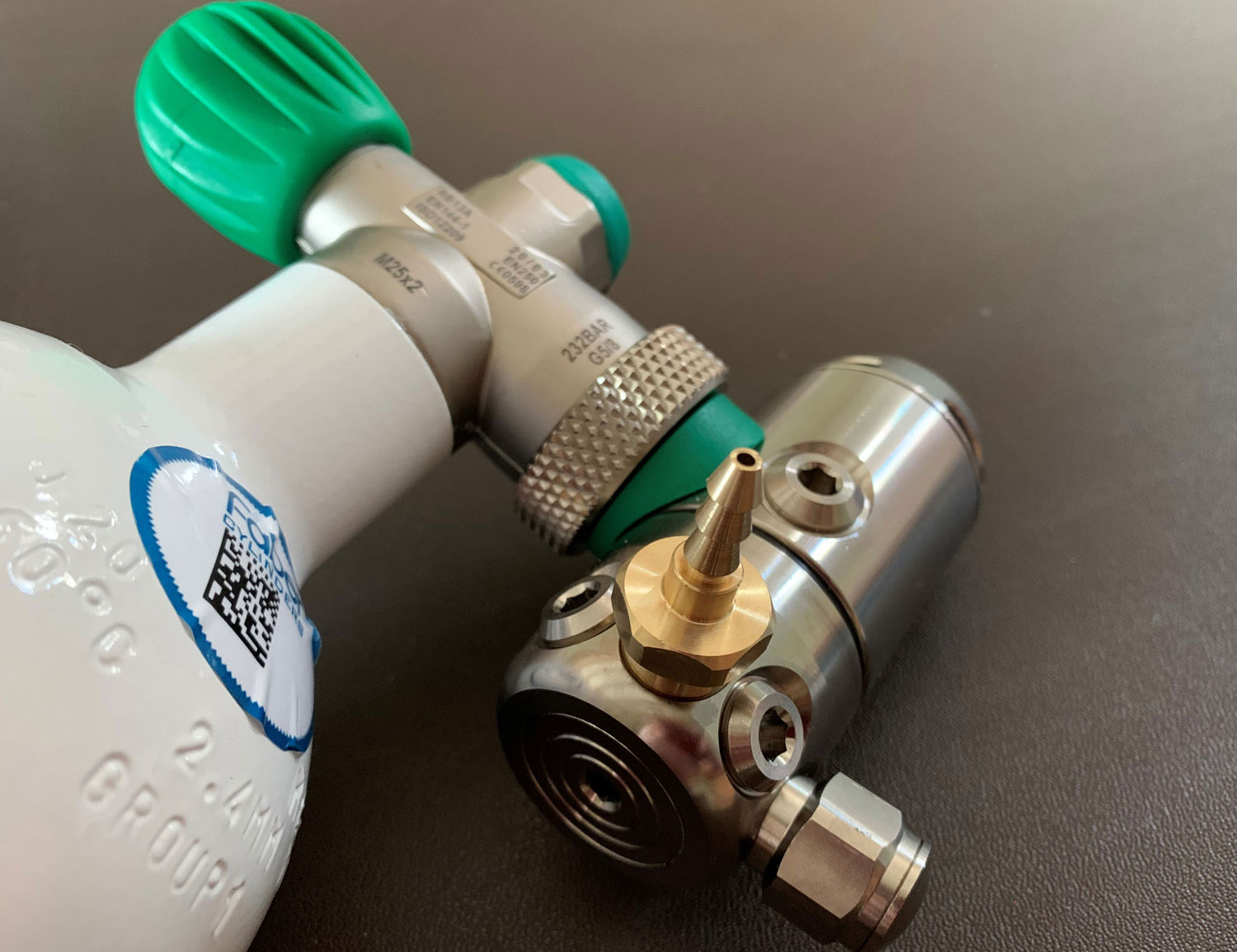 They have also tried to address the needs of their local community. “We have equipped our employees who are trained primary care responders including oxygen administration, with O2 cylinders and adapters just in case they have relatives in need,” Parker said. One bureaucratic hitch: in some countries diving oxygen is not supposed to be used for medical applications or be dispensed by non-medically trained personnel but these are extraordinary times.

“I think you agree with me,” Parker offered “We're not dealing with normal circumstances in this crisis. Many divers are sitting on perfectly good oxygen, which has to pass tighter impurity controls than medical oxygen, if only they could deliver it at a fixed rate.”

Another UK-based diving equipment manufacturer, Narked at 90 has also entered into the fray, using their in-depth technical engineering expertise to supply oxygen control and monitoring systems for the new OxVent ventilators manufactured by Britain’s Smith+Nephew. The OxVent design is the result of collaboration of scientists, clinicians and med-tech manufacturers from the University of Oxford, King’s College London and Smith + Nephew itself, and is meant to allow for large-scale production amid the shortage of ventilators in the U.K. and around the world. It is currently being reviewed by the government for authorization. 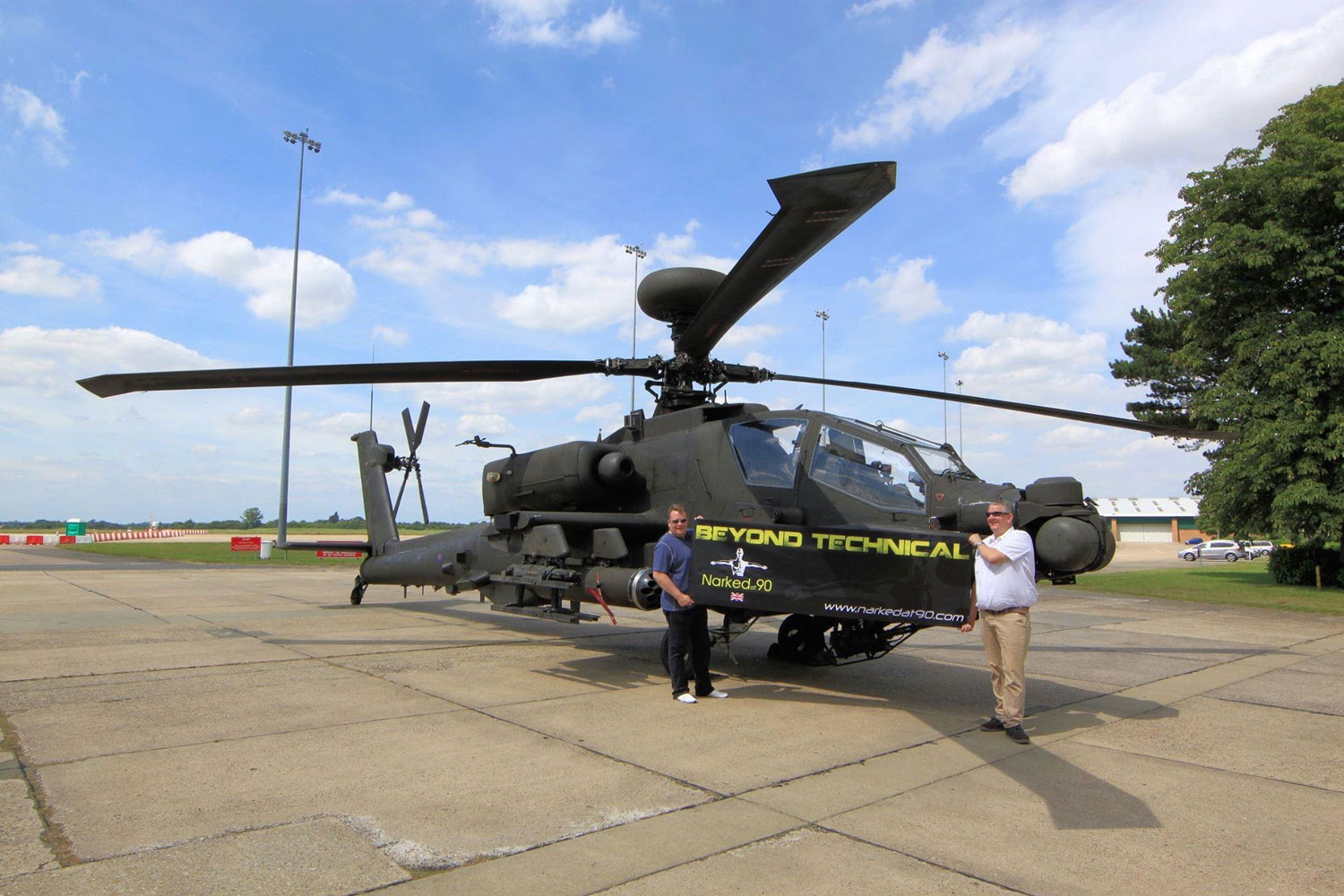 “We are truly proud to be able to provide our expertise and key components in support of this project, and to play a part in solving the current ventilator challenge that the NHS is facing,” Brent Hudson, Narked at 90 co-owner and technical director said. “We’re trying to save as many lives as possible!”

The Brits aren’t the only ones applying their technical expertise to helping to save the lives of COVID-19 patients. Divesoft co-founder and engineer Aleš Procháska joined a consortium of individuals from the Czech tech industry, educational institutions and government to develop a quality low-cost, open source-design ventilator that can be produced worldwide. 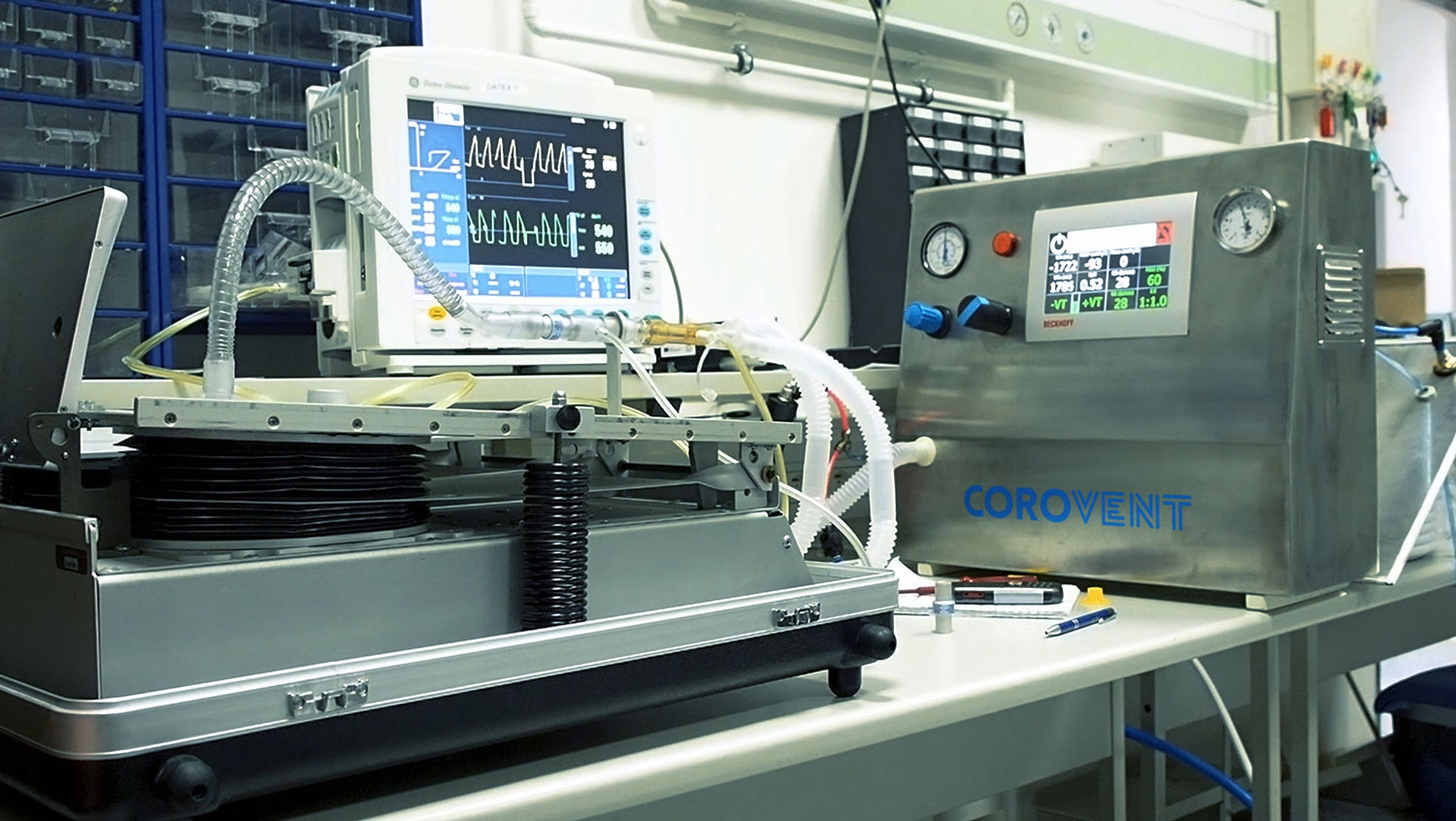 The medical ventilator’s design features include the use of easy to manufacture parts, a user-friendly interface that minimizes the training requirements, simple assembly, and more. The design also includes the ability to run on bottled oxygen and “regular” filtered compressed air, as well as compatibility with hospital systems. They hope to have 500 ventilators ready for deliveryby mid-April at a fraction of the US$20,000 cost of traditional units.

“I’m focused on the development and construction of pressurized valve prototypes,” Procháska explained. “It’s a safety valve which limits the oxygen pressure that a patient breathes to ensure the device doesn’t cause injury to the lungs.” Divesoft produces similar valves for their Liberty rebreathers.

Who Was That Masked Man?

In March, SANTI Diving, which makes drysuits, joined a Polish nationwide campaign #BusinessSupports, and devoted a portion of its production facilities in Gdynia, Poland to making protective facemasks for health workers. The masks were donated to the local Pomeranian Hospitals Group. ”We made the decision some time ago,” said SANTI founder Tomasz Stachura,” and has become even more significant in the face of current crisis.” SANTI has also started producing prototypes of hazmat suits and protective visors to protect healthcare professionals against the Coronavirus disease. 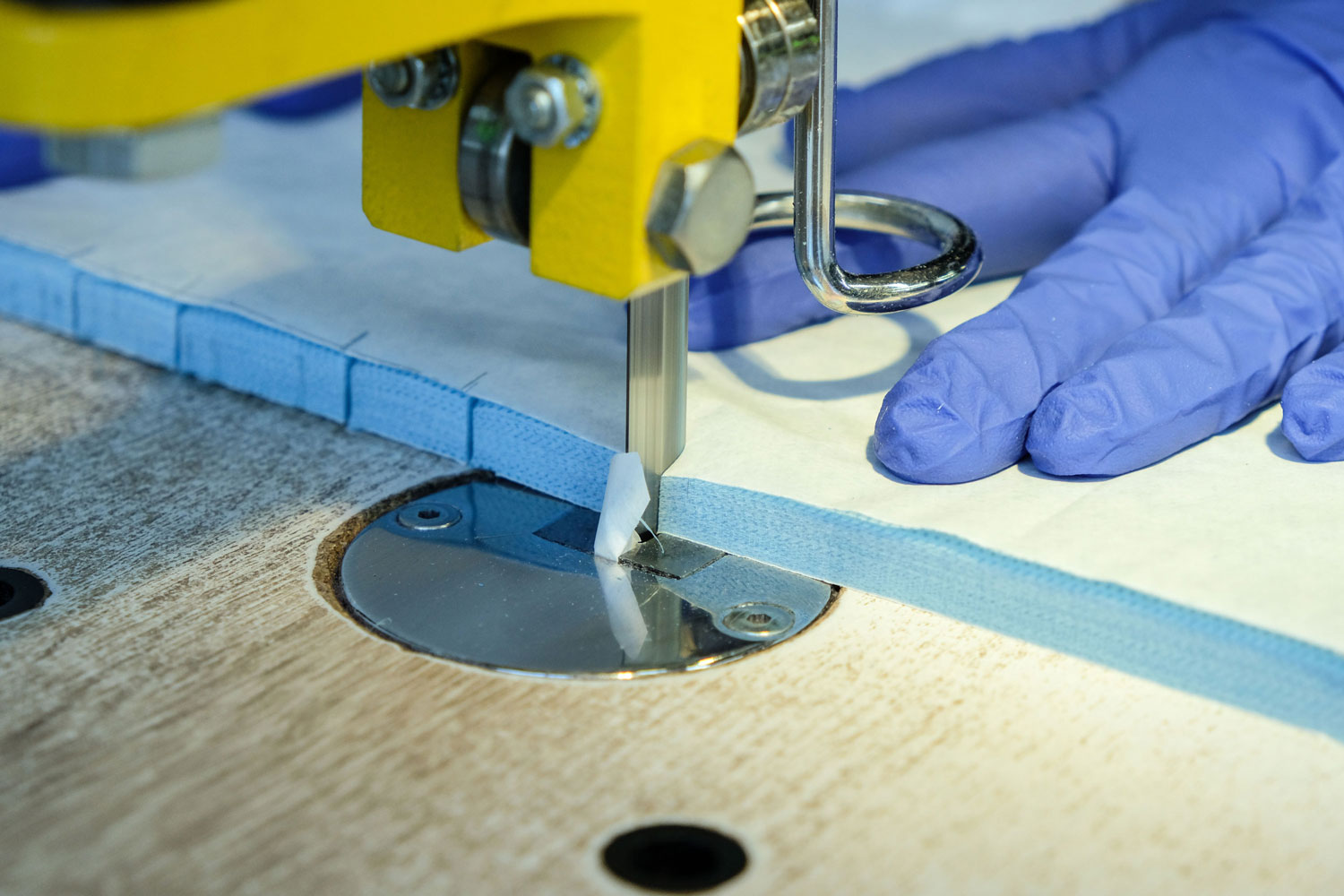 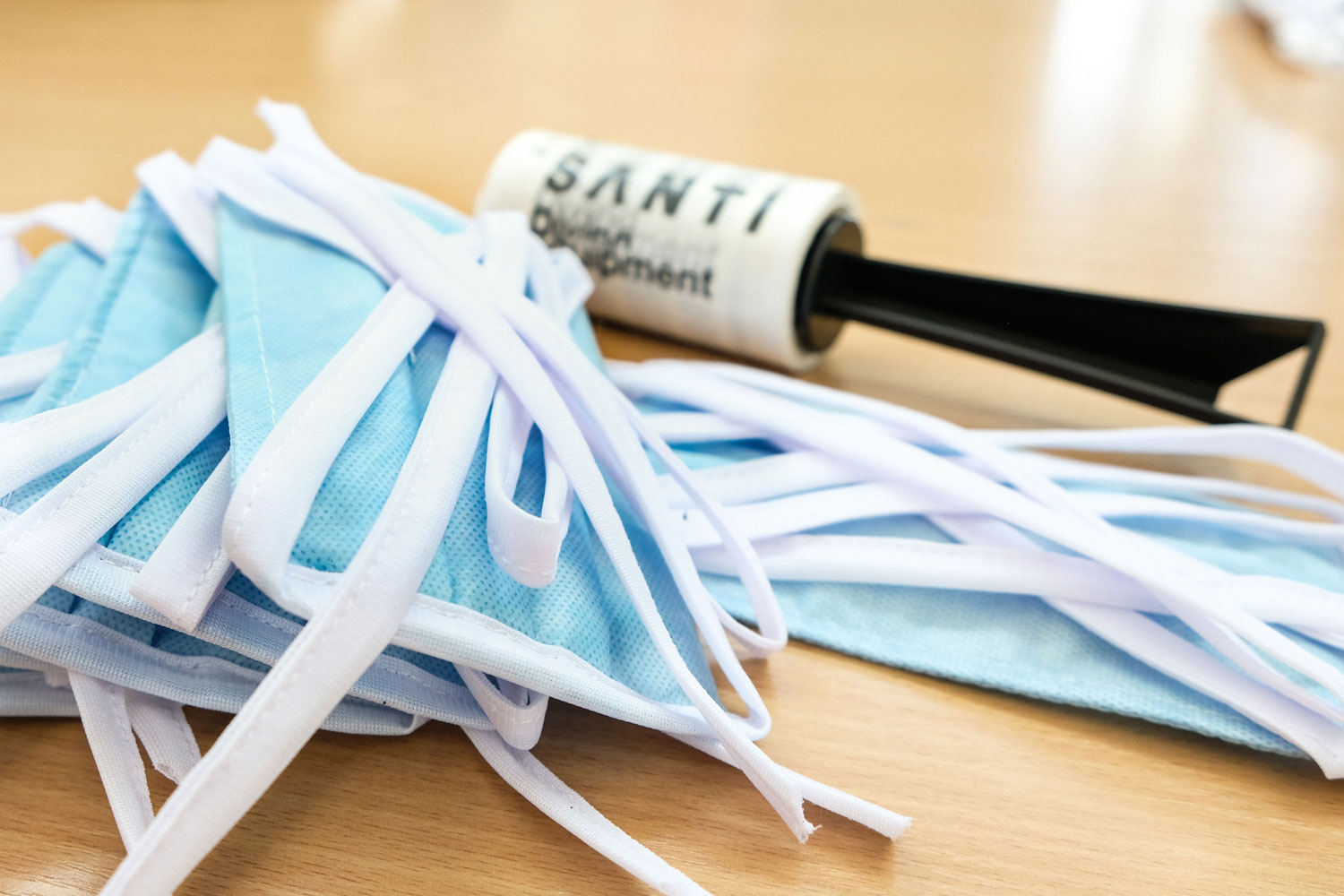 In the US, in response to the CDC’s new recommendations for people to wear cloth masks in public, Waterlust, a Florida-based family business started by ocean scientists, which makes ocean-themed advocate-apparel, began producing colorful protective masks that they sell at their US$3 cost. 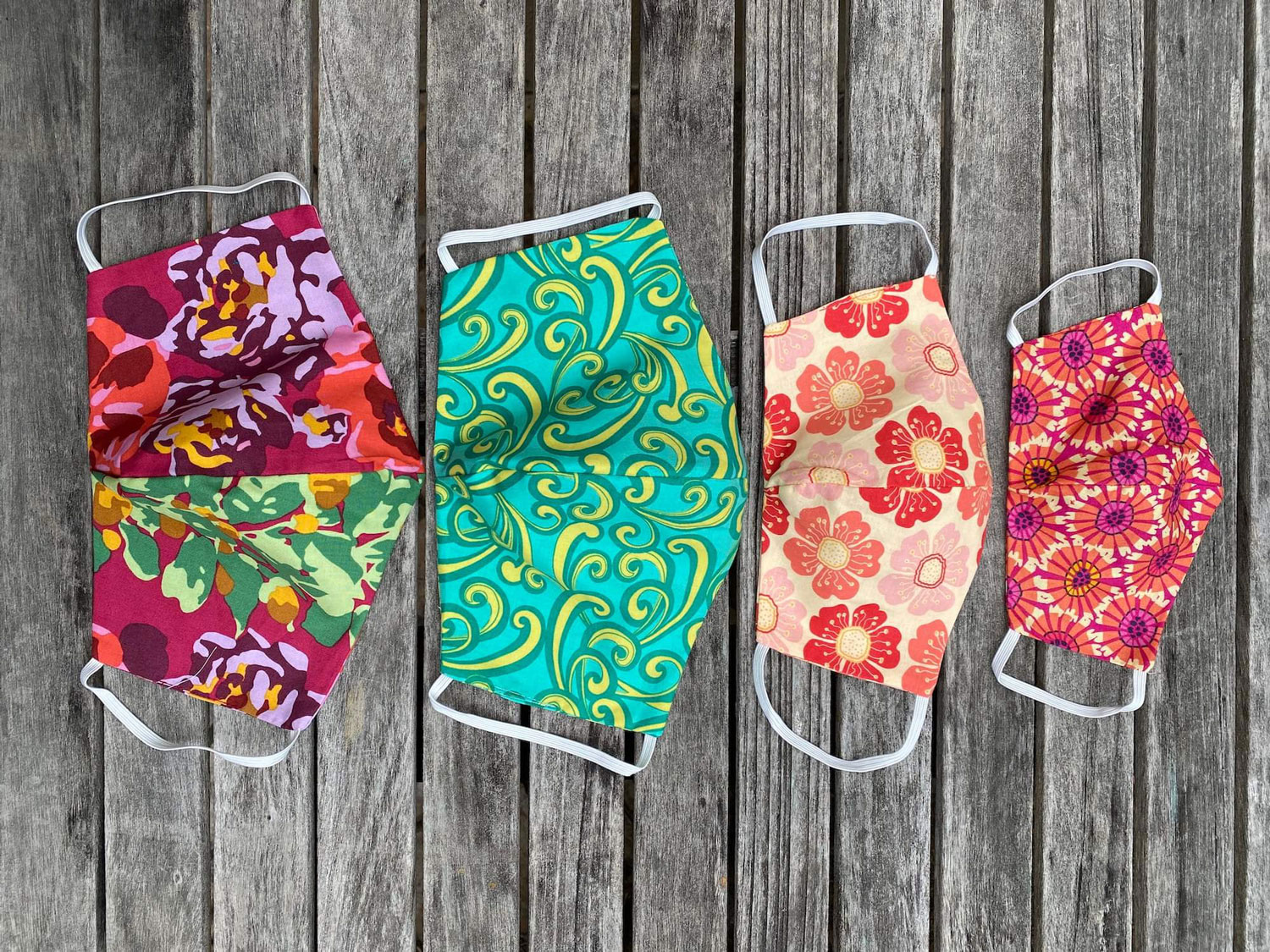 The company has also partnered with the City of Miami government to donate masks to fellow Floridians who might have a difficult time acquiring one for themselves such as the homeless, and elderly, etc. They are currently helping to distribute some 500 masks locally. For people that don’t need a mask but still want to help, they’ve setup a “donate masks” page where you can contribute funds for mask donations; 100% of the funds go towards manufacturing masks.

Face masks, which divers are well familiar with, are obviously critical to protect health care workers as well as consumers from the onslaught of the pandemic. That was likely part of the motivation for Italian Company, Mestel Safety, which builds full-face masks for snorkeling and scuba under the Ocean Reef Group brand Ocean Reef, filed an international Patent for an adapter to connect their masks to P3 and other types of filters transforming it into a personal protection mask. Reportedly, the mask maker has an installed base of some 1.25 million users. 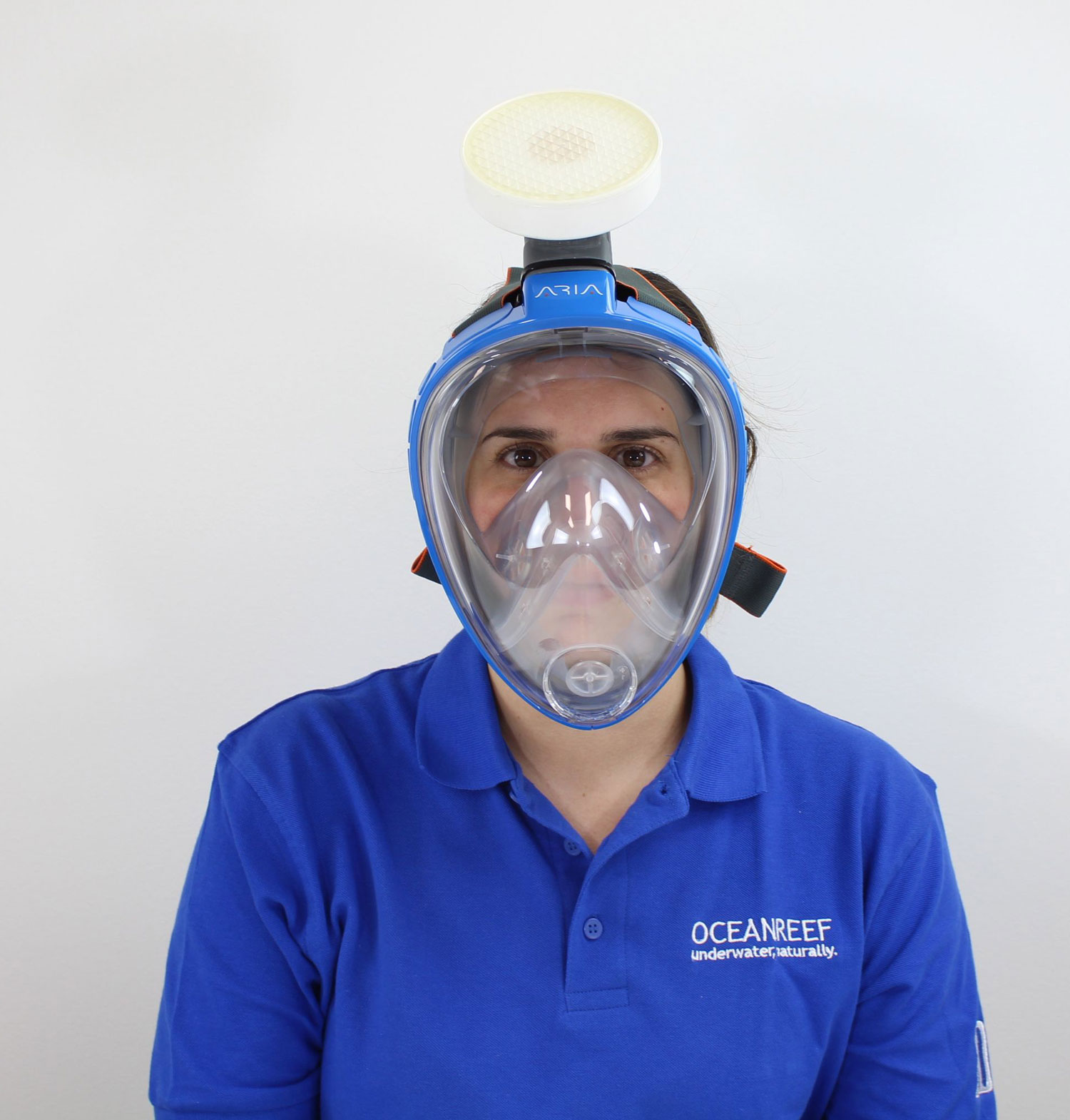 According to the company, the mask with adapter is not meant to replace standard personal protection equipment (PPE). “We are just offering a possible solution, in a time of dire need, to physically create a barrier, with the possible addition of a filter, to contagious droplets,” a company spokesperson said.

France’s Subea’s Decathon brand, which manufactures the "Easybreathe" full-face snorkeling mask has also joined the fight. They were contacted by an Italian 3D printing start-up called Isinnova, that had developed a printed valve called the “Charlotte Valve.” The valve attaches to snorkeling mask enabling it to connect to a hospital’s BiPAP machines, which then pump pressurized air into mask, making sure patients' lungs don't collapse. The adapted Easybreathe masks allows doctors to treat some patients with respiratory problems without having to put them on ventilators, which are increasingly short supply. Subea has donated tens of thousands of masks for use across Europe in this effort, while Isinova has made the design freely available.

Fighting The Virus Mano a Mano

Diving manufacturers aren't the only ones on the front lines helping to fight the pandemic. DAN Europe’s Benelux Medical Director Dr. Peter Germonpré, Dr. Oscar Camacho from DAN Portugal, and the Area Director DAN Europe Germany, Austria & Hungary, Dr. Ulrich van Laak, who also serves as an active Naval Medical Officer the German Naval Institute of Maritime Medicine, are all fully engaged in the battle in their respective geographies. They are not alone. 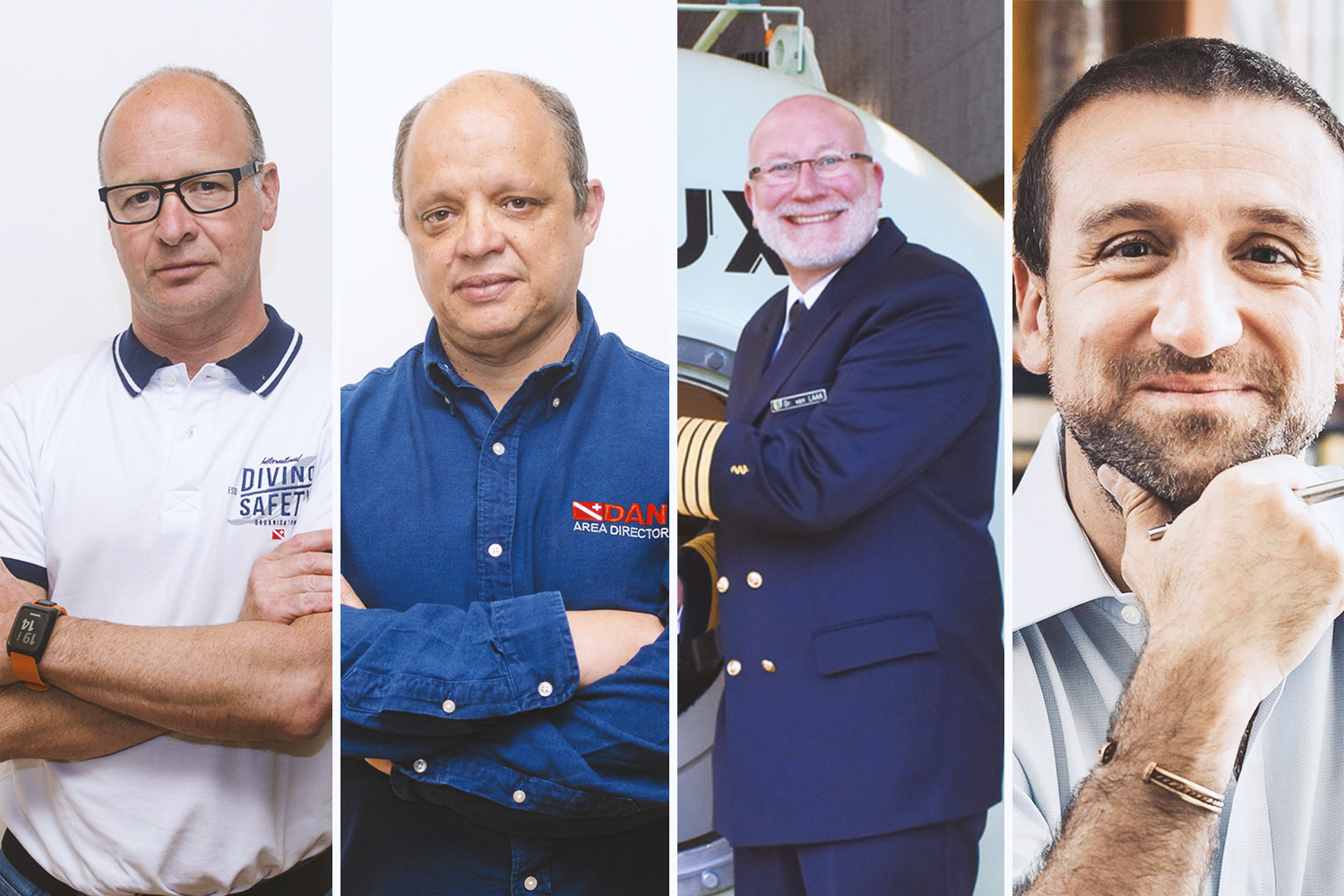 Dr. Stefano Manera, a specialist in anesthesia and critical care medicine, who serves as one of DAN Europe’s medical doctors, left his home in Milan, last month to volunteer at the intensive care unit at the Papa Giovanni XIII hospital in Bergamo, located in the so-called “Red Zone, that is, in the epicenter of the epidemic in northern Italy. “As an anesthesiologist, I have always worked on the front lines throughout my professional life including working as a volunteer in Africa for many years,” explained Manera. “It was absolutely normal to respond to the cry for help. I don't think I made a heroic gesture; I simply responded to my sense of duty and the desire to help people,” he said.

Manera says the shifts are long and tiring because of the protective devices that they have to wear, and the decisions are complex and stressful working with sophisticated life support equipment and gas mixtures that require constant attention. “As a diver and as a diving doctor, I like to think that every shift is a bit like facing a very demanding technical dive where you need to plan every detail in order not to risk your life and be able to get out of the water unharmed,” Manera elucidated.“In this case, dark water is the disease and immersion is our cure path.” 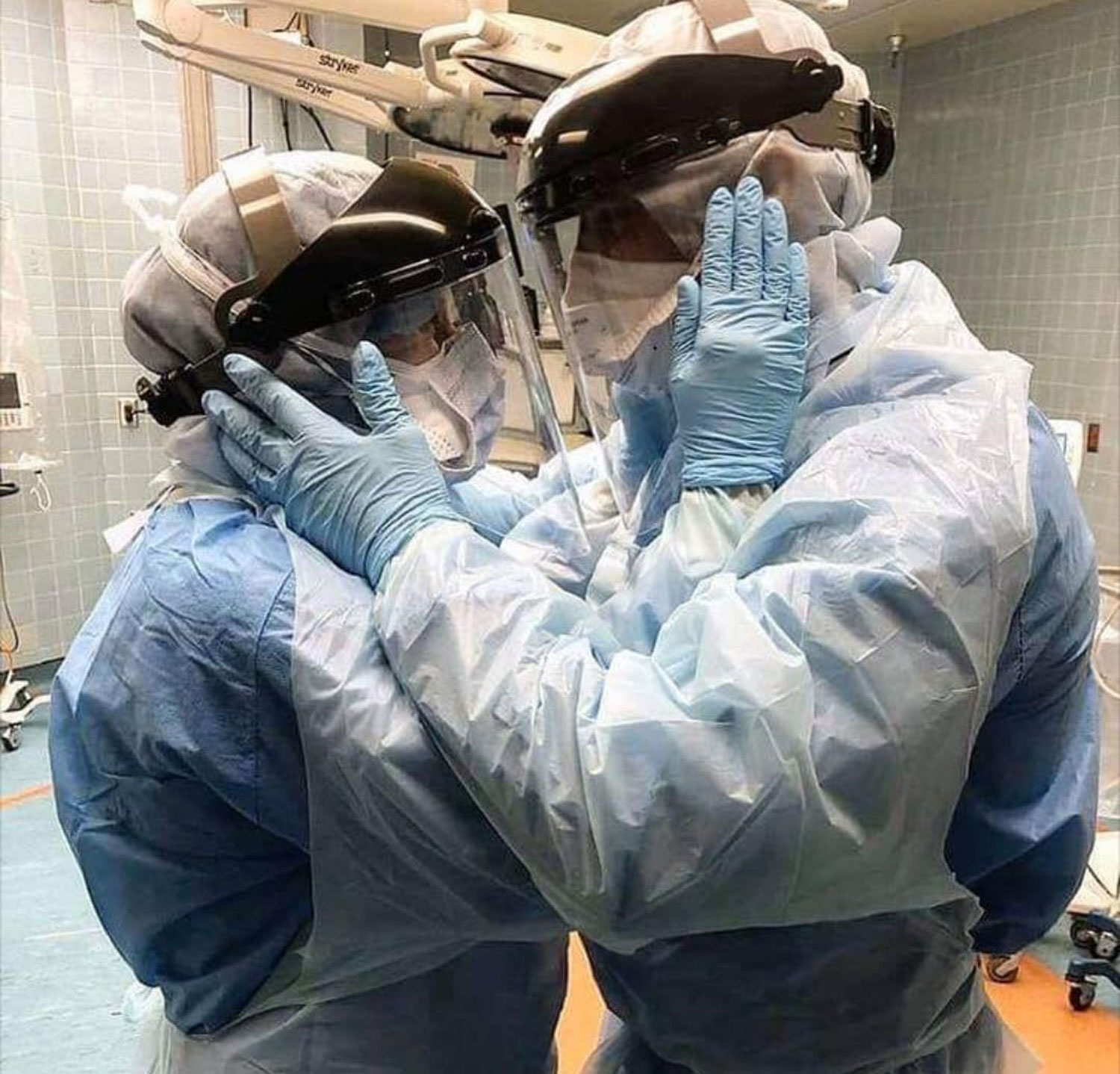 Do you know of other diving organizations or individuals helping in the fight? If so, please contact us at: editor@alertdiver.eu

Alertdiver.eu contributing editor Michael Menduno  is an award-winning journalist & technologist who has written about diving and diving technology for more than 25 years. He coined the term “technical diving.” His work has appeared in magazines such as Alert Diver, DeeperBlue.com, DIVER, Quest, Scientific American, Sports Diver, Undercurrent, Undersea Journal, WIRED and X-Ray. He founded and served as editor-in-chief for aquaCORPS Journal (1990-1996), which helped usher tech diving into the mainstream of sports diving. He also produced the first Tek, EuroTek and AsiaTek conferences. Michael is on the board of the US Historical Diving Society, and serves as the editor-in-chief of InDepth, Global Underwater Explorers (GUE) online magazine.