A dive is never over until it’s over

It was my last dive of the day. The last few minutes of the dive and the last dive of the trip. I felt distracted by the scale and scope of the coral from looking for the small things on Chicken Reef near Kri Island in Raja Ampat. And maybe tired too after ten days of liveaboard diving. My dive buddy and dive guide were ahead of me while I lagged behind having some nostalgic moments. A rush of thoughts was going through my head. What a beautiful day…what a reef…what incredible corals…will I get to come back? I was gliding up the slope, and a rubble patch, a break in the middle of the vast forest of hard and soft corals, appeared below me.

I was calm, meditative…and then a bright yellow spot in the middle of the coral rubble grayness caught my eye. But it was moving! And it was moving with those tentative robotic steps of a frogfish. I was not so close, but I was sure it was a frogfish. I “called out” to my dive buddies through my regulator, “Hey!”, forgetting I could have banged on my tank with my stick, but they did not hear me. I settled down close to the rubble at 10 meters and began to watch my friend. He was slowly tiptoeing through the rubble as if he were trying to be invisible. He should have been, he probably thought. “Uh-oh.” 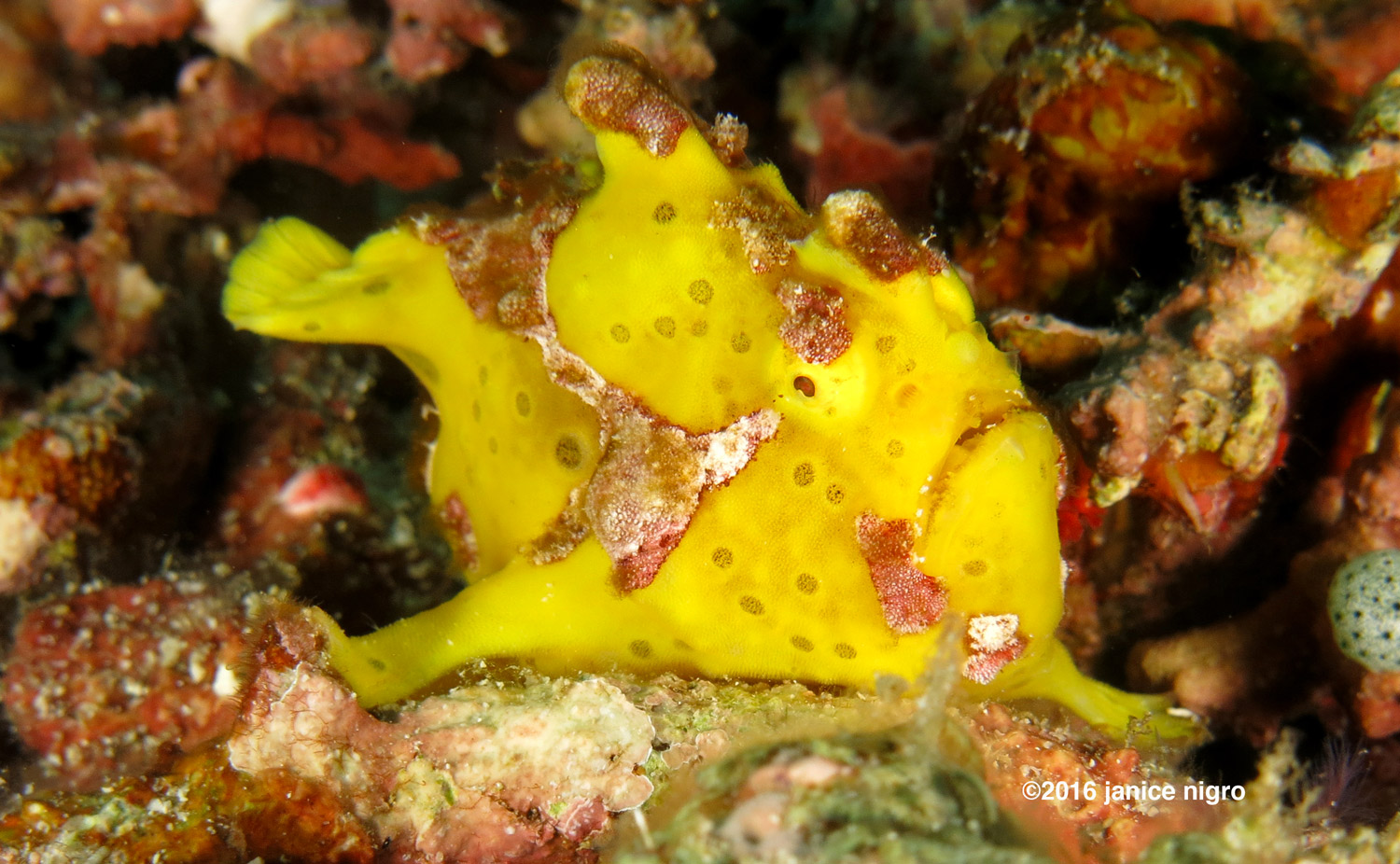 If he didn’t know it, I was equally as surprised to see him. Both of us were in a place we should not be. My lesson was that a dive is never over until it’s over, but his lesson had to be of a more serious nature, one about survival. It is rare to see a frogfish out for a stroll in an exposed environment like that. They do not really swim. They generally move about the reef and bottom by walking on their fins assisted by bursts of water propulsion through their gills. More importantly, they are ambush predators. Frogfish sit, wait, and snatch their prey faster than any other animal on Earth.

They can do this because they are so well camouflaged. Many frogfishes have the appearance of a sponge (or sometimes coral), complete with algal growth. They often reside near or inhabit for long periods of time an actual sponge, assuming its exact color. Predators as well as prey are fooled. The first time one was pointed out to me, I wasn’t even actually sure I saw it. It seems like a sort of sedentary life incognito, but evolution did not abandon them. They are fisherman, coming equipped with a lure at the end of a filament emerging from their heads, like a fishing pole, in order to attract unsuspecting prey.

It was a tremendously satisfying find to make on my own. You look across the expansive reef on dives like it’s infinity, wondering if you are still on Earth or in a dream. And then unexpectedly your eye catches something that is slightly different from the rest. It moves and you discover it. Dive guides do this every dive-“by accident” they say. “I know where to look.” “It’s my job.”

I did my best to photograph him, but he kept on moving. Even for a frogfish he was moving quickly. He was choosing the rocks with care though, like an agile climber looking for sure footing on a mountaintop. And he did not give me a big yawn. It is a classic desired behavior pose in frogfish photos, but a yawn is often a sign of stress. 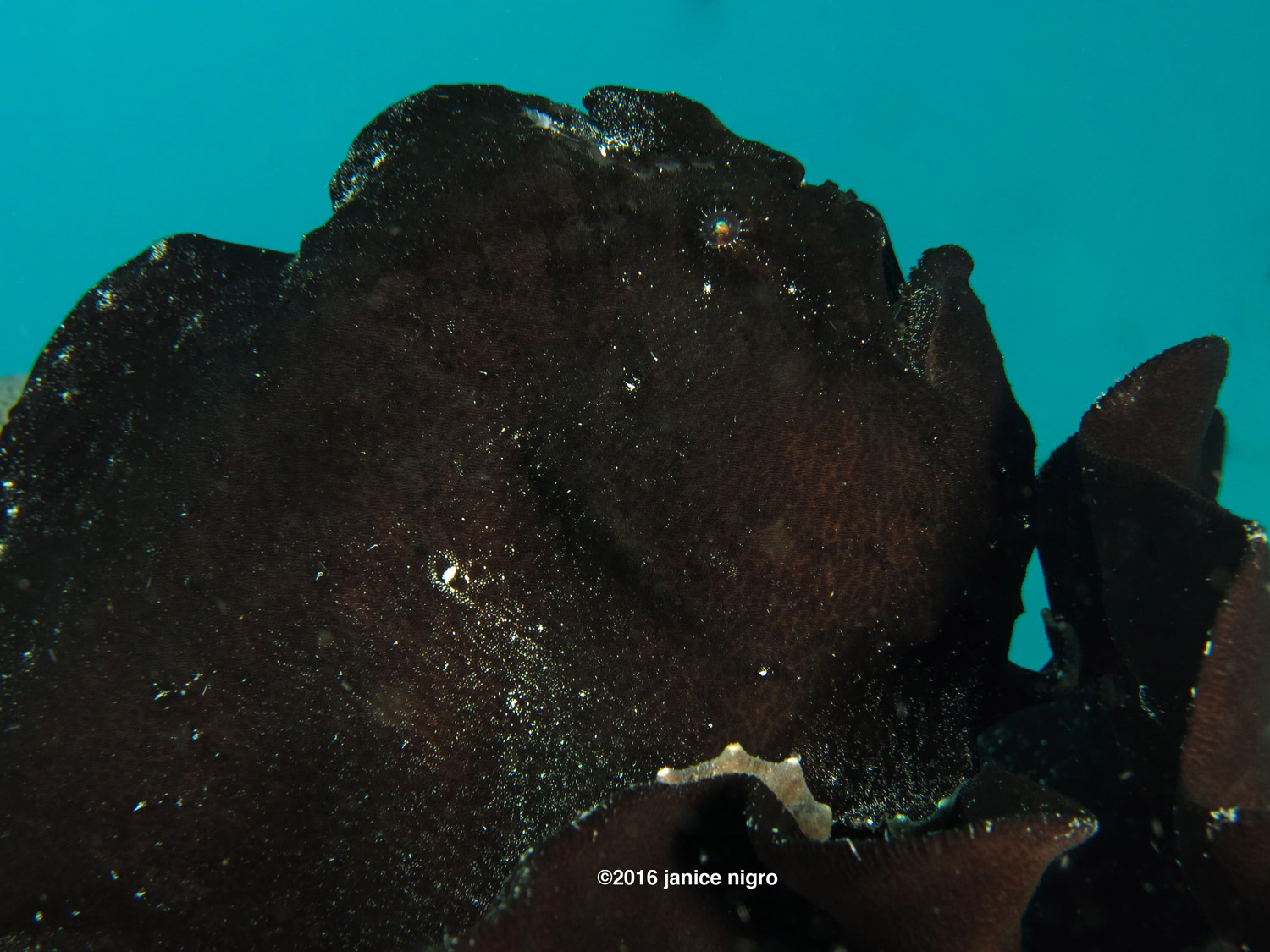 My air was getting low, and the juvenile frogfish was disappearing into the rubble. It was time to leave. I threw him and the reef a kiss and started up the slope to do my safety stop with the others who had looked back only briefly to confirm that I was still with them. I had made them wait too many times before while I photographed unusual coral patterns or just another anemone.

I was going to wait until topside to show my guide Michael the photograph, but I could not contain my excitement. His eyes got big and there were a few frantic moments to go back, but it was too late…the frogfish had been for my eyes only.

Janice Nigro is an avid scuba diver with a PhD in biology. She is a scientist who has studied the development of human cancer at universities in the USA and Norway, and has discovered the benefits of artistic expression through underwater photography and story writing of her travel adventures (janikiInk.com). Her current home is Hermosa Beach, California.